No minster in Munster?

The back garden of the B&B in Vreden was scattered with life-size metal sculptures, and the first to greet you was a life-size crocodile, somewhat surprising in a sleepy German town. I had been warned that my room wasn't quite 'ready',but what the owner actually meant was 'not quite yet built'. She was having a loft conversion done, and while there was some semblance of walls and wiring, there wasn't what you'd ordinarily call a light-switch, and although there was a door to the room, it wasn't anywhere near the room itself, but leaning up against a wall on the other side of the house. The room consisted of a couple of camp beds, and despite everything else was clean and habitable, and after my 100km dash, I was about ready to sleep anywhere. I wandered into the centre to find a plate of carbohydates for dinner, then wandered a little further to find a convenient bench close to an open wireless network for a spot of wifi-jacking. (The B&B was supposed to have internet, but the owner had ripped out all the equipment earlier that day in a bout of paranoia). I was struck by how close to the border I was, and yet how quickly the lingua franca changed. Particularly now there is nothing more than a sign to mark the boundary between countries, much like there is within the United Kingdom, it left me wondering what effect political union will have in Europe in blurring languages at border towns over the next generation.

I had no idea where I was going to be staying the following night, or even where I'd be. It depended largely on the weather which seemed somewhat erratic. It was due to be sunny in the morning, then rain all afternoon. There not being much to hang around for in Vreden, I decided to head off and see how far I got. If I could make it all the way to Muenster, 75 km away, then that would be ideal.

I didn't set off in the end until 10am, but as the R1 route took a much-extended scenic route, there were lots of oppportunities for short-cuts without compromising quality of environment much. The few short stretches I was following a main road, there was always a separated cycle path, so high-speed traffic was never a problem. However, while I had three methods of following the route - on the GPS, paper maps and signposts - it was still possible to take a wrong turn, especially when these three options didn't agree with each other. At one point, I chose to follow the signposts and regretted it as I ended up on a track that got muddier and muddier - too difficult to stay on the bike in points, and not ideal for walking in sandals. I had to give that up as a bad job and retreated back to one of my other routes. 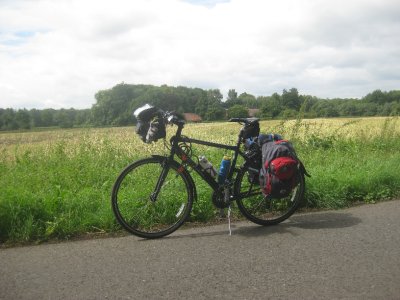 Stopped on a country road

I could see the rainclouds gathering in the distance behind me, readying themselves to race me to the city, so apart from a couple of brief road-side pauses, I continued nearly 50km before a lunchtime break in pretty Billerbeck - and that was just to a bakery and a town bench.

I had expected the weather to have beaten me by now, but I braved onwards. It looked like I might reach Muenster that day. I had originally not expected to get there for another day and had arranged a couch to surf for Thursday night. I texted my host, Babsy, to see if I could come a day earlier. 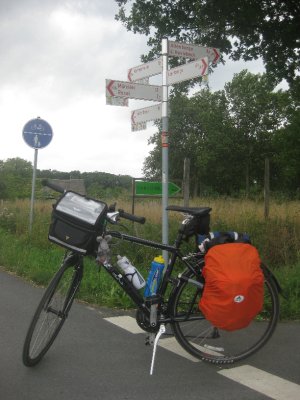 Then, a kilometre outside Billerbeck, I felt the drops of rain. I found the shelter of a couple of trees on the road-side just in time before the dark cloud let rip, and I busied myself finding and attaching the waterproof covers to my luggage. I also pulled out my raincoat, ready to wear it for the first time on this trip, but no sooner than I had done so, the rain stopped. The cloud seemed to disappear into thin air, and I rode in sunshine all the way to Muenster.

When I reached the city, I tried texting and phoning Babsy again, but got no answer, so I took the last available bed at the local youth hostel. This was just 1km from the city centre on the edge of Lake Aa. Someone was desperate to be first in the list when they named that. While the bed in a shared dorm was not as cheap as I remember hostels to be at €27, an evening buffet meal for €5.50 was excellent. The rain had started again by now and I spent the evening catching up on my Dutch diary entries - more than one of you had wondered what had happened to my blog - but with much of the day taken up with cycling, and finding decent internet not easy, it was easy to slip behind on ths.

I didn't sleep particularly well in the dorm; no sooner had the last person come in to go to bed, it seemed that the first early riser was clattering around having a shower and packing to leave. I'd not helped myself by forgetting that I had to make the top-bunk bed, and once I'd remembered, the light was already off and I was keen not to make too much noise, so the ensuing mess that might otherwise be called bedclothes were lumpy and uncomfortable.

I tried to contact Babsy again in the morning, both by phone and email, but resigned myself to searching foralternative accommodation that night - it was time for a rest-day in Muenster in any case. By lunchtime I had an email back from her; she realised she'd mistyped the phone number she gave me so had no idea I'd been trying to reach her. All was good - I'd explore the town for a few hours before heading over to her place.

Muenster is famous for being as much a cycling-city as any Dutch town. Bikes tend to be parked not in ones and twos, but in dozens and hundreds, on every corner and anywhere there's a bit of free space. Rarely do people lock the bike to a fixed object - there just simply aren't enough of them to go round. They just prop it up on the stand, nestled among other bikes (what's the collective noun for bikes?), and turn the key on the build-in lock, which prevents the back wheel from turning. Of course, bikes do get stolen from time to time, but that's just the way it is. Cars get stolen from time to time, but we don't throw a ball and chain round a tree to keep it in place. The built-in stand is an absolute necessity... and back in my day (the early 1600s) all bikes came with a kickstand of some sort. It was part of the bike, just like the wheels and handlebars. But when I bought this bike and asked for a kickstand, they looked at me like I was mad. 'What do you want that for?'. Well, duh. It took them 6 weeks to get one from their distributor, but I'm glad I persevered - every time I stop on a country lane for a break, or in busy towns with nowhere obvious to lean the bike against, it gets used. The only argument they could give me for not having one was, they claimed, it would make the bike less aerodynamic and weigh it down. Clearly they hadn't actually seen one in a while.

So Muenster is Germany's cycling city, huh? So WHAT'S WITH ALL THE COBBLES?!!! At least it gave my bones a god shake in lieu of a much-needed massage. There was also some confusion (to me) about where in the Altstadt you could actually cycle. Some bits were pedestrian-only zones, some allowed bikes, some only between certain hours, most (but not all) one-way streets allowed bikes in both directions. To confuse it further, signs were often placed with a symbol of a bicycle and the word 'frei'. Talk about amibiguous... does this mean 'free of bikes', or 'bikes are free to go here'. It's the latter, but I still have to pause for thought whenever I see the sign. 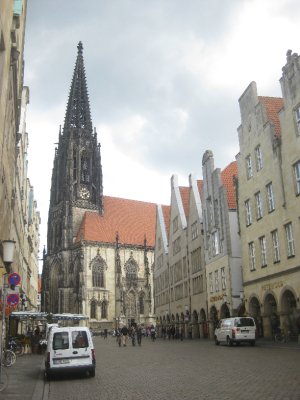 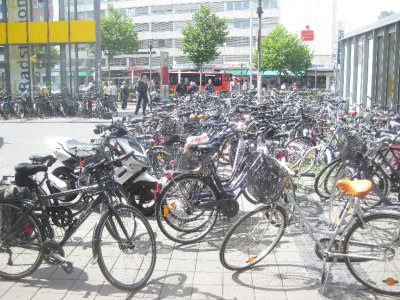 One of the smaller bike parks 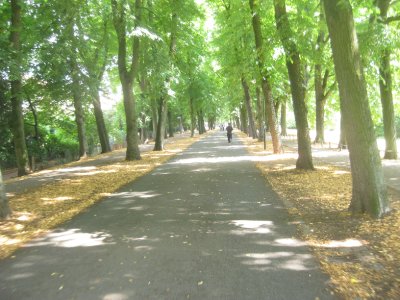 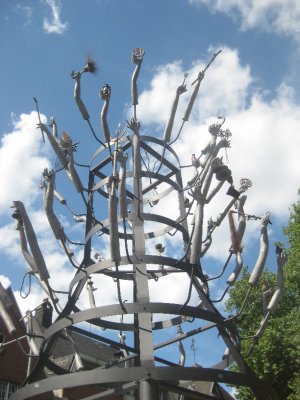 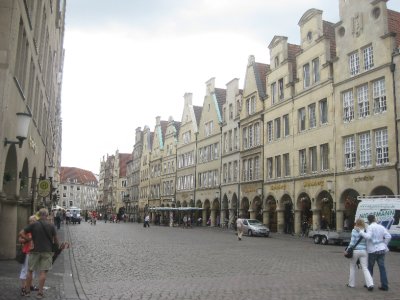 After a couple of hours exploring this charming city (full of DOZENS upon DOZENS of churches, though none of themare actually called the Minster), I went back to the Youth Hostel to collect my bags, then pedalled round the leafy Promenade to Babsy's address. Most city Couchsurfers are in flats or small houses,but this was a large house not far from the centre. Babsy occupied the attic floor, but shared the house with several generations of her family - it used to be one big family home, but is now subdivided into floors. As a child, the attic was where they used to hang out the washing, but was big enough to convert into a two-bedroom apartment with lounge, small kitchen and bathroom. I spent the evening with Babsy and her brother, and some of her friends including Julian,a tall airline pilot, and his girlfriend Lily who I decided must be the tallest woman in the world. We sat in their parent's kitchen eating traditional Westfalian food and sampling the local brew. This was to be a pitstop before going out to a party (or clubbing, I'm not sure which), but we were still there at 1 a.m., and after a week on the bike, I was flagging, so eventually passed up on the early-morning 90s disco music experience.

In the morning, I let myself out, bypassing the offer to raid her parents fridge for anything I could find for breakfast (I didn't feel entirely comfortable doing that!), instead finding a bakery on the way out of town.

The cycling was feeling easier, if not easy, and I found myself less interested in stopping to see places, pausing long enough for a rest and then onwards once more. One of these rest stops was a cafe I spotted on the other side of the street. Like any good German, I waited at the pedestrian crossing. And waited, and waited. Eventually, we could get across. As I sat at an outside table with my sandwich and drink, I watched other people waiting and waiting at this crossing. Geekily, I timed the phasing. This was a junction of a not particularly major road, with a side road running off it. The main road was given a massive 7 minutes of green light before pedestrians could cross, and cars turn from the side road. What interested my here was the behaviour of the people waiting to cross. In the UK, there wouldn't have been anyone there after 7 minutes - even the most die-hard waiters would eventually have taken the opportunity to cross in the many gaps between traffic. But while I sat enjoying my lunch, I saw people tap their feet, look at their watches, jab the button repeatedly. Eventually one man broke ranks, and darted across, looking very shifty as he did so. Anywhere else, this bravery would be joined by others like sheep in a flock, but no-one else dared break the red-man rule!