From Dutch to Deutsch

It's Monday morning, and Marco & Judith are off to work early. They leave me to stay as long as I like, but I've got another 80km planned today, so I'm out of the door by 9.30. I meander out of the town - partly to see a little more of it, and partly because I'm not quite sure where I'm going; despite having a GPS cycle computer, it can be difficult to follow in towns with lots of roads, especially if you've detoured from the planned path.

Once I get out onto the open road, I find a local farmer selling fresh fruit froma hot-dog van, so I stop for a breakfast of freshly-picked raspberries and pears.

Each day, the first few miles are hard-going as my aching joints resist getting back on the bike and the sore backside protests with a pang of pain as it remembers what was endured the previous day, but I soon get back into the swing of it. I'm varying the comfort levels by way of a removeable gel seat cover, though I'm trying not to use it too much as it's not helpful in the long run. But generally I relish the fresh air and the road ahead, and only feel slightly daunted by the distance that lays ahead that day. I try not to think about the distance that still lays ahead on this trip, nor the mountain range that lurks half-way across Germany. No, I'll stick with the nether lands of The Netherlands. So far, touch wood (and Woerden downpour excepted) the weather has been ideal on this trip. Never windy, never more than the briefest refreshing spot of rain, frequent sunshine but never too bright, and a perfect temperature. Long may that continue! 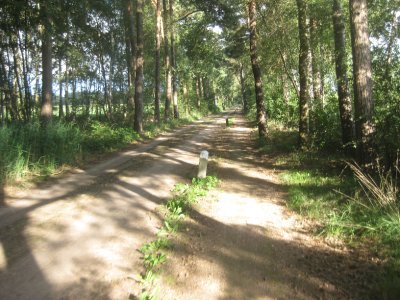 Even the forests have separate cycle tracks 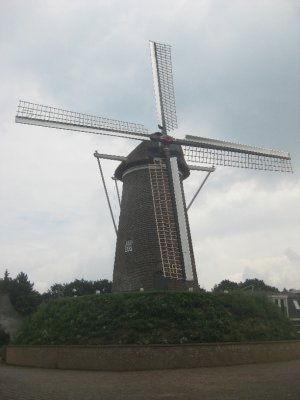 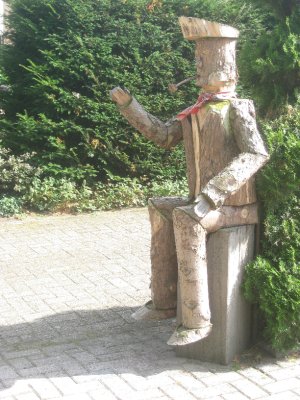 With cycle paths on all classes of roads exceeding anything in the UK it doesn't really matter which route I take, but for the most part I keep to quiet country lanes where the only traffic tends to be the odd tractor ad occasional goat. I keep a fairly careful eye on both signposts and my GPS unit though. While I'm generally following the Dutch national route LF4a, occasionally the signs don't match my map, or they disappear, and I have to make the occasional decision. The route also usually goes out of its way to avoid even the smallest town, and from time to time it's nice to pop back to civilisation for a snack and a rest. One such place is Rhenen, mid-way between Utrecht and Arnhem where I stopped for lunch. Intending to order something reasonably healthy, I ended up with a 'Misty-burger and fries', the burger containing two slabs of meat, bacon, cheese and a fried egg, and the chips served with mayonnaise and curry sauce. Oh well, I'm burning off the calories I suppose, but I'm not going to lose any weight like that!

Just as I was about to leave Rhenen, the town lived up to its name as the heavens opened again - nice for it to be timed while I'm already sheltered. So I sat it out for an hour before it seemed safe to get on my way. I then followed the main roads most of the way to Arnhem, experiencing the first gentle undulation in Holland after a flat few days. One road even had an 8% gradient sign, which must have been specially commissioned. 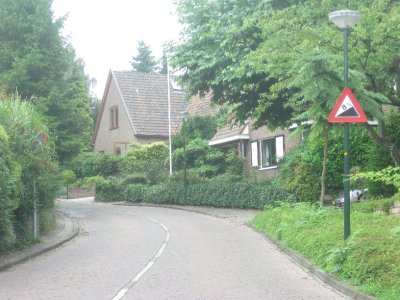 In Arnhem I surfed another couch, this time with Norma. She's recently moved into her own place and has a spare room. She cooked me a delicious dinner, sat out on her balcony a while chatting, then headed out for a stroll around the town, finishing with a couple of drinks in her favourite bar and a walk back along the river. Again, it would have seemed surprising to bystanders that we'd only met that evening, and I nearly took up her offer to stay another night, and give myself a day exploring Arnhem. But after a well-deserved lie-in, I checked the weather forecast: a day of sunshine, then a full day of rain was on the cards. I didn't fancy cycling in that rain so decided belately to get ahead of myself, packed up my things and headed off. 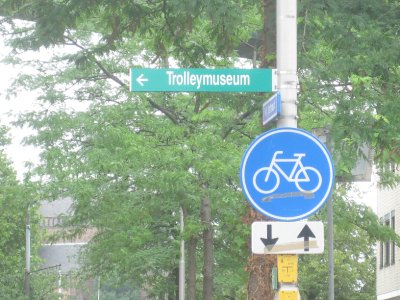 A museum for everything in Arnhem

It was indeed a pleasant day to cycle, though the first several kiometres were fairly gruesome up a sizeable hill into a National Park. Down the other side was much more enjoyable of course - and would have been more so if I had a working back brake! Again I meandered along country lanes, through farms, and in forests. At one point I got a little confused as I had to cross a small river and couldn't see the bridge marked on the map. I saw some people on a small ferry, but it took a little time to twig. So this was my third ferry crossing of the trip - easily the shortest. 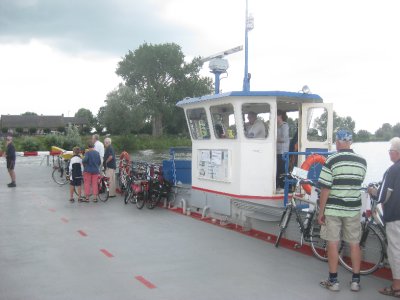 Third ferry of the trip to cross 20 metres 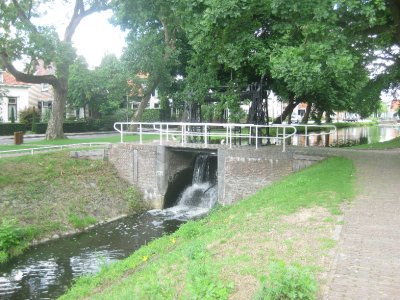 I was finding my stamina growing, taking longer distances between breaks and feeling less exhausted. After an apple-pie-stop in the picturesque town of Borculo, I reached the Dutch-German border at Zwillbrock at about 6.30. I had made it the entire way across a country! Now if only the next one could be so easy! I still had about 16km to go that evening as I was due in a Bed & Breakfast in Vreden. I texted the owner to give an ETA of an hour, and she replied with certainty that I'd be there in 20 minutes. I'm not sure how she rides a bike, but there's no way I was averaging 45 km/h on the flat! 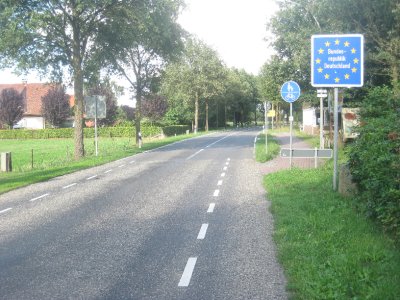 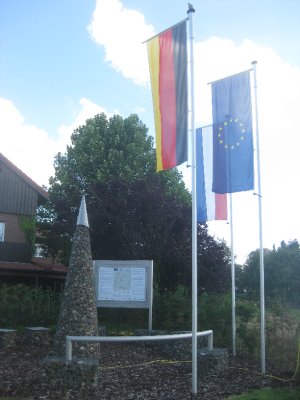 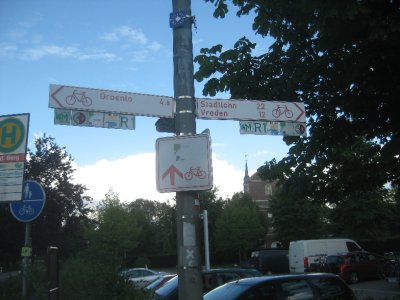 From now on I'm roughly following these R1 signs

As I approached Vreden, I could see on my bike computer that I was going to have done about 98km that day - a record. But because I like that kind of thing, I wanted it to tick over to the magic 100km, so I weaved around the town for a while before heading to the accommodation. I took my bike round to the back gate, wheeled it through, and found myself confronted with the gaping jaws of a 30-foot (10 metre) crocodile.

You can't leave it like that Ado!!!
I'm gripped....it's like reading a book you can't put down, only to find the next pages are missing!!!
Next blog soooon please....this is great!
Well done, we're proud of you!
E x

Your ending reminds me of the serials that used to be shown to kids in cinemas on Saturday mornings. Great narrative, lovely pics. Look forward to next instalment