I set off early on Sunday morning. I was due in Gouda, 30 km hence, at 10am to meet a friend who was going to cycle with me for a while. I'd checked the map and seen a route that took me right along the motorway. I didn't feel keen on this for obvious reasons, but as I had to get my skates on, I went with it. I needn't have worried. With noise barriers offering some aural protection and a large grass verge on either side of the path, this was a very quick and pleasant path. I had intended to head in across a park to Zoetermeer to get away from the main road, but there didn't seem any point; this route was fine. 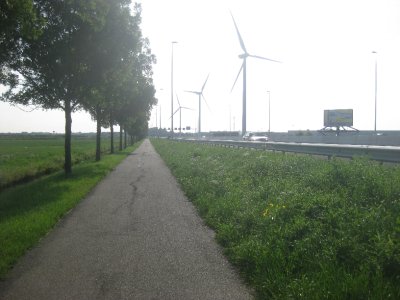 Even the motorways have cycle paths

I got to Gouda ahead of time, and explored the pretty town before Dorota arrived from Brussels. It has a traditional European town square with a fairy-tale town hall in the centre, decked with traditional red and white shutters. The square is of course bordered with street cafes, where we lazed for brunch before setting off again. As in many other Dutch cities, wide streets are split by canals with little hump-backed bridges joining the two sides. However, what other towns lack are big replica (or real?) Gouda cheeses hanging across the streets like Christmas lights. Tasty if not tasteful. 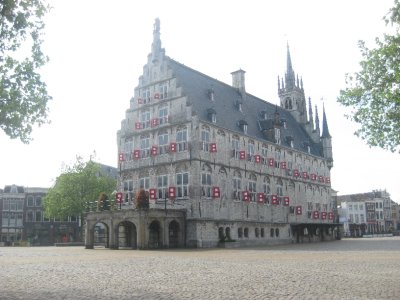 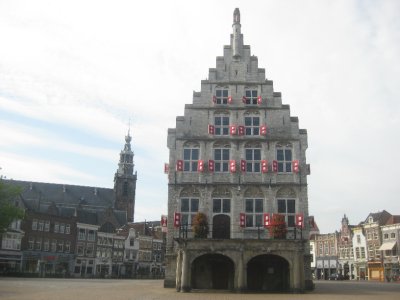 We mapped out a route to Utrecht, heading directly east through some small villages. We then proceeded to go in completely the wrong direction, starting north alongside the Reeuwvijk lake. By the look of the map, this route was to take us alongside another main road, but we never saw it. While we started off on a segregated road-side path, we soon found ourselves following the bank of a wide canal. Many of the properties along here made a feature of the water, with part of the canal (or some other large water feature) making up a part of their garden. Many were small-holdings with a couple of sheep, chickens or goats. All were in pristine condition, both house and garden. The Dutch are very house-proud, and when you live in surroundings like these it's not hard to see why. 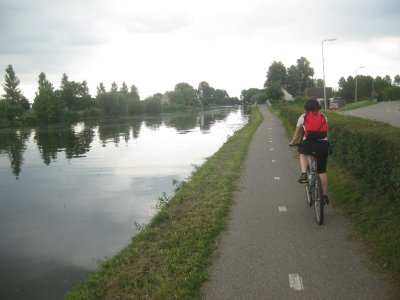 Along the canals with Dorota 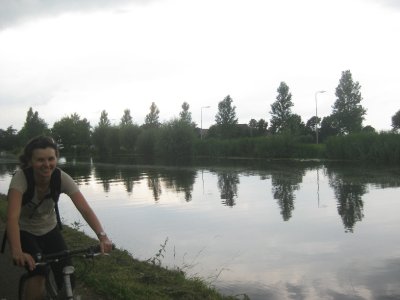 Dorota by the canal 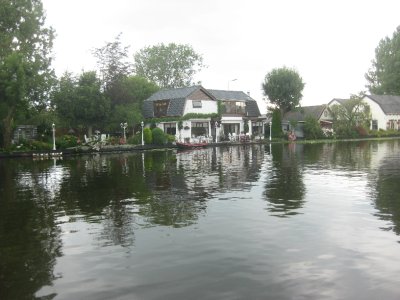 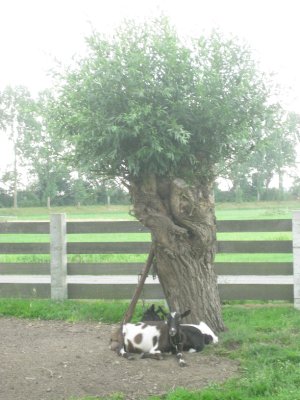 We stopped for a late lunch in Woerden. As soon as we parked up the bikes, the heavens opened. We sat outside (the tables were covered by one large umbrella, but had to shift the tables and chairs somewhat to avoid the rain splashing in. A hearty soup helped keep up the liquid intake, and we stayed a while to wait for the clouds to move on. Just as they seemed about to, the downpour intensified again, so there was nothing for us to do but sit back and order a plate of home-made apple cake and cream.

Eventually we could leave, and meandered our way out of the town to re-join the canal. This took us all the way in to Utrecht - an incredibly attractive and lively town with well-oreserved historic buildings, canals, as well as the hustle and bustle I like in a city. Between this, the cycle paths and the countryside I've seen, I'm starting to think this is somewhere I could live. Of all the places I've been, I don't often say that. 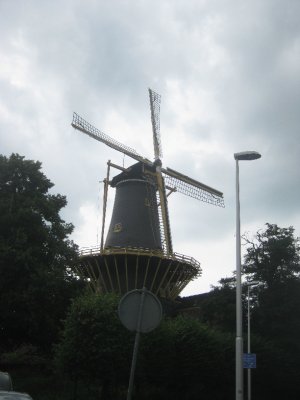 At last - a windmill 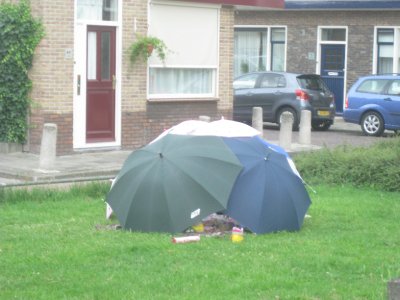 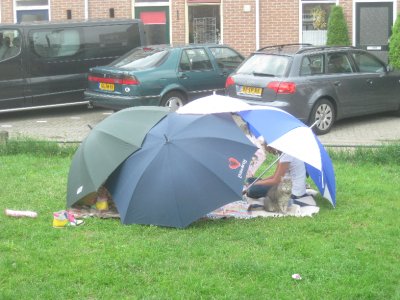 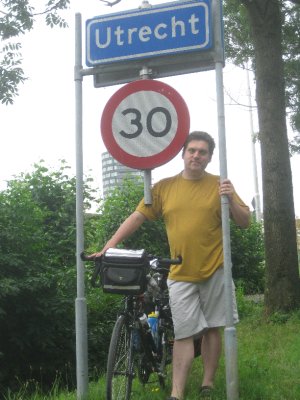 Made it to Utrecht 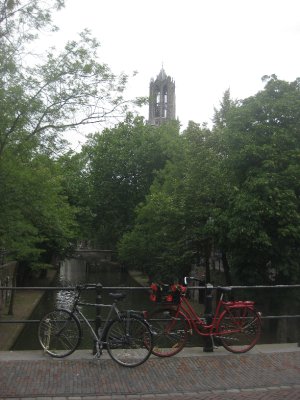 After seeing off Dorota at the train station, who was to head back to Gouda where her car was waiting, I went in search of my accommodation. This was my first experience of Couch Surfing, and I must admit to being a little apprehensive. Couchsurfing.org is a website putting travellers in touch with one another - people who have a sofa, matress or spare bed with those on the road looking for somewhere to stay. You upload a profile about yourself, get in touch and ask nicely, and hope for some positive replies. There are some checks to help keep you safe, but a lot of it is down to instinct as to whether you want to stay with or host a particular person. I'll write more about this in a separate post sometime soon.

Tonight my hosts were Marco and Judith, who lived a pebbles pelt from the town centre. I rang Marco when I was outside, so he could come down and let me in, then had to heave my bike up a flight of stairs. From the first moment, Marco treated me like an old friend, and we sat chatting about my journey, technology (he'd make a good iPad salesman!) and their gorgous cats (who they're teaching tricks to), and browsed his impressive photography portfolio - he's just set up in business (no job too far away! book him at ....). Judith rustled up some felafel and pizza before we headed off to the cinema with their friends Ton and Victor. I was somewhat surprised by the interval in the movie - that got dropped about 30 years ago in the UK, but is still common over here. Still, the film warranted another beer half way through. My first 'couch' to surf consisted of a comfortable mattress on the floor in the living room. One of the cats stayed in the bedroom, the other with me - they have to be separated. With the cathedral so close, and the hourly chimes happening throughout the night, I put in some earplugs and settled down to a good night's sleep. Before I did, I texted Dorota to tell her that I hadn't been murdered with an axe - she was poised and waiting to rescue me from the clutches of these dangerous strangers!

---> Don't forget you can follow detailed maps of all my journeys be clicking here or following the link at www.hambidge.com (Wait a few seconds for it to work out which are my routes, then click on the day from the list on the left. You'll then see all sorts of stats, plus a zoomable map.

Cheese! Before I was only a little bit jealous … now I am green. But glad it is all going so smoothly (literally, apparently) and at least I have something interesting to read when I am meant to be working ;o) Impressed with parts of the nether-regions; my “places to go” list is growing. But back to the logo – was it all your own handiwork?

Well... the cycle sign was 'borrowed' from the Dept for Transport website. The outline map of Europe was taken from a random website. But then I coloured it in, put the sign together etc. So I think enough of it was my handiwork to take credit!