Middle of Somewhere to Middle of Nowhere

The start point, Greenwich, was chosen firstly for the meridian - as natural a starting point as any - and secondly because last year I cycled from Bristol to Greenwich, so I'm really just picking up that journey. At the time, that trip (193 miles over 5 days) seemed an absurd thing for someone of my fitness level to do, but I set myself the challenge, and was as surprised as anyone to actually complete it. I had perfect weather on that trip, and enjoyed the freedom of cycling along canal towpaths and the undulating hills along quiet country lanes. I mused to myself that perhaps I shouldn't stop at London, but turn right for Dover and even, (ha ha) cycle all the way to Warsaw, where I used to live (and still have an apartment). Obviously something quite so stupid wasn't really going to happen... but the idea niggled away at me over the last year, and when I was last in Poland in May, it came back to me, and I joked with some friends in Poland about it. Naturally, they didn't take me seriously, and I think the conversation started off by me just trying to impress a girl... but I don't break promises lightly. The chances that I'll actually make it are really rather small - but if you're a Terry Pratchett fan, you'll know that one-in-a-million chances are dead certs - so here's hoping!

The train from Paddington inevitably delayed, the train ticket sold at Paddington to go to Greenwich bizarrely/inevitably (delete as appropriate) not valid on the underground (how else do you get there?!), then the Circle Line apparently following a nest of hedgehogs round the track (there being no other explanation for the speed of it), we eventually got to Greenwich after 3pm. What a stupid time to start a bike trip. Tonight's B&B is 45 miles away, and I've done no cycling for over two weeks,and have a fully laden bike that I can barely lift.

Fortunately, I had company, or I'd have given up before I started. Dave Southorn was keen and enthusiastic, raring to go, and sporting my special T-shirt that I had made up especially for the trip. I gather he even had some impressed shop assistant flirting with him before we even left central London - and he's only going to Colchester. Next time, I go into the shops! 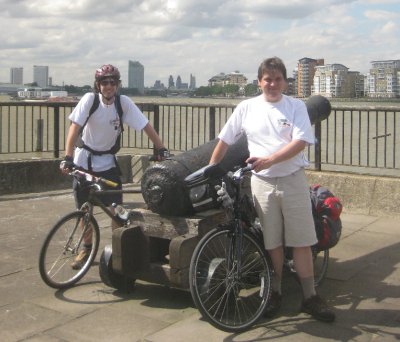 From Greenwich station, a quick detour via the river for a photo, then we're off. I'm trying to follow a pink line marked on my cycle computer showing me the route I worked out earlier, but with so many small roads (and user incompetence), we quickly lost it and found ourselves on the side of the main road that I was so determined to avoid. Eventually we found ourselves on the Thames Path. This doesn't always follow the Thames, nor in places can it be really described as a path, and if you look closely at our GPS track you'll spot a few places where we had to about-turn and find another route. 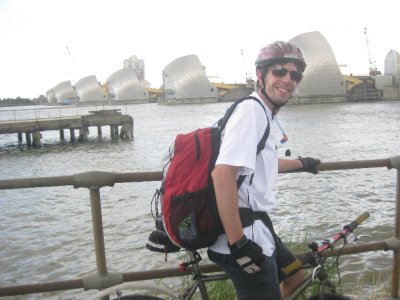 We whizzed past the Thames Flood Barrier and through much industrial landscape, much of it a remnant from yesteryear, with abandoned Victorian buildings mingled with newer housing estates. Occasionally we had to get off to squeeze through narrow gaps designed to allow only bikes through; they may be fine for racing bikes, but carry panniers and it's quite a struggle.

At Erith, we pulled away from the river, and took the road to Dartford, eventually stopping for a well-earned drink at Pub Number One. Couldn't stop long though! We may be more than half-way to Gravesend, but we hadn't done a third of the distance for the day, and the clock was ticking. 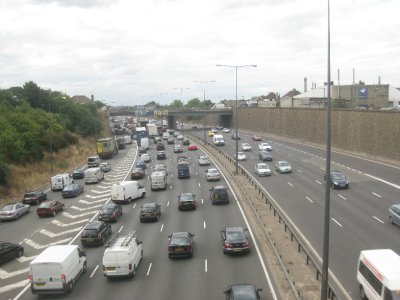 We were going south of the river, but tonight's B&B was north, in Battlesbridge. From this point, there were two ways to cross the Thames - at the M25 Dartford Crossing, where cycles are carried across in a van, or on the Gravesend to Tilbury ferry. Finding information on this ferry on the internet proved fairly elusive, and we were relying on other traveller's tales that it did indeed still run, and took cycles. But how late into the evening it operated (if indeed at all) or how frequently, we really had no idea. If it didn't,our only option would be to get a train all the way back in to central London, then a train back out again to Essex. Fingers crossed!

Between Dartford and Gravesend used to be very familiar territory to me, having lived there until age 11, but the appearance of Bluewater shopping centre and Ebbsfleet Eurostar station has changed it almost beyond recognition. The small towns and villages seem a little more run down than they did before, with the money pouring into the developents instead; and it was a fairly unattractive industrial area to start with. But still an interesting trip down memory lane, past home and school. 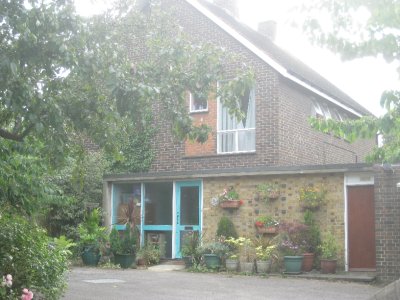 Our house in Swanscombe 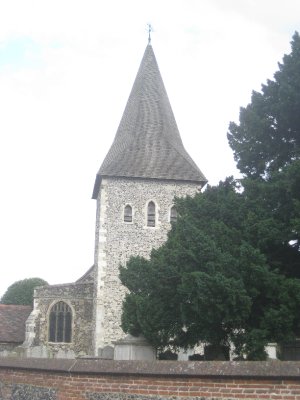 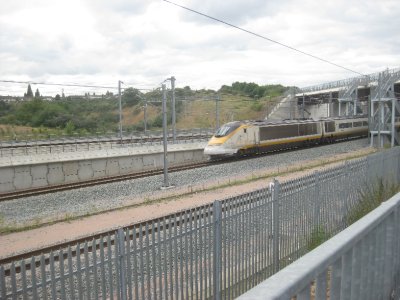 Originally we hoped to be in Gravesend by 5; with the late start and a short stop that pushed back to 5.30. At 5.45 we were still a few miles away but thought there might be a 6pm ferry to pushed ourselves to make it there. Along the main road, up the hill, pulling my bags behind ... did I really need to bring everything I did? Then turn off to the quieter town roads and look along to the docks. We couldn't see anything that resembled a ferry, or even any signs to it. Pre-panic. Round some houses, and there was a somewhat old-looking sign: 'TILBURY FERRY', pointing down an unlikely dark alley. Round the corner, and there was the ticket office ... closed! Panic! It was a minute to six, so we'd made our revised time... but in vain? Where was the station? How long would it take to get a train round to the other side? We were feeling somewhat deflated when a bloke appeared from the side of the ticket office, and assured us that the boat was running and there was a 6.00 crossing. He pointed us down to it; we rushed down, only to be stopped by the crew. "Too late! We can't let you get on board! You'll have to catch the next one in the morning!" A bit of pleading fell on deaf ears... until the guy from the ticket office just ambled on board and we realised that these jokers were not crew at all, but pissed-up passengers hitchhiking around the country. 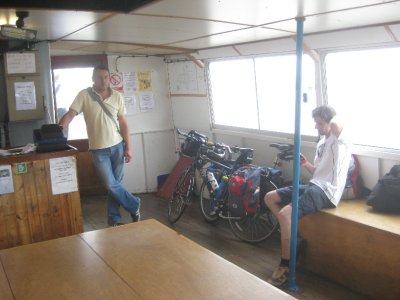 Just five minutes later and we're off the other side. No time for a rest yet; we've done 25 miles but there's still over 20 to go. Cycling inland, the countryside is immediately more pleasant: no more of the industrial landscape we've had along the Thames, but fields and farms and distant church spires. There's little traffic on these country roads, until we get to the edge of Basildon. My GPS (and the maps I consulted in advance) assure me that we should turn down the slip road onto the dual-carriageway by-pass, as there's a cycle path running alongside it. It seems unlikely, but we give it a go. At the bottom of the slip, sure enough, there is a separated path for bikes... which lasts for a grand total of 100 metres. We are not even given a gentle merge into the suicide lane; the path just stops abruptly and we have to manage our bikes down the kerb into the 80 mph traffic. THIS BIT IS NOT FUN. It looks like we're due to stay on this for about 3 miles. Time for some prayers, and maybe phone in a quick Will to a solicitor.

After about half a mile, we spot a narrow country lane running parallel,so we clamber over the embankment to safety, and find our own way for the next few miles. Very hungry by now, we stop at the first pub we see for a meal.

Sunset is at 8.50pm, so we can't hang around long at the pub, but we don't get away until 8.20 and there's at least an hour to go - longer as I'm now slowing down a lot. In trying to avoid one more section of big dual-carriageway, we seem to end up on another going in the WRONG DIRECTION! We can't cross it as there's a barrier in the middle. Fortunately there's a small pavement down the side for most of the way, but we have to edge ourselves down the slip road carefully as traffic speeds round the corner towards us. It's dusk, and I now find my emergency lights are not all they're cracked up to be - in fact, the back one doesn't work at all. Ahead, a police car spots us and slows down... fortunately to speed off again!

Eventually, drained of all energy, we see a sign to the hamlet of Battlesbridge, and check in to the B&B. 75 kilometres (45 miles) covered on the first day,and we barely have the energy to lift our pints at the nearby pub! 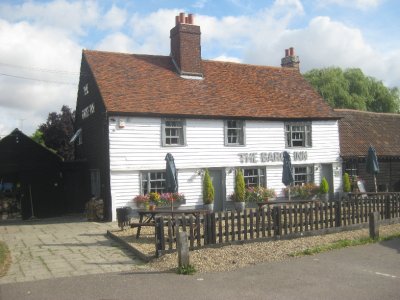 CLICK HERE TO SEE A MAP OF TODAY'S ROUTE

Ace. Love the pics too - can't quite make out the T-shirt logo, but guess it's the groovy one on the top of the blog. Bit disappointed that there are no charts showing heart rate/endorphin levels/oxygen debt but no doubt it's all good. (If you'd really wanted to cheat, there must be crossings to Gdansk from the UK..?)

Yes, its that groovy one. There's a version of it on the back of the shirt too - much bigger. They were a great idea - they've made my trip a talking point several times over the first couple of days.