I'm lucky to have tools and information available to me to make navigation so easy. Signposts, paper maps, electronic maps, GPS with compass, internet through my mobile phone. How on earth did people on horseback in days of yore nagivate the land? (incidentally, were the days of yore before or after the olden times? What about yesteryear? Chronological order required please! Anyway, I digress...)

When the guy in the bike shop saw that I had both a GPS unit and a map holder on top of my handlebar bag, he laughed that I was clearly worried about getting lost. But even on a well-marked route across civilised cycling countries, I was pleased to have both. When all three (signs, GPS, map) agreed on the route, it was easy, but frequently one would diverge, and occasionally all three would point in different directions. There was no right answer, and I'd judge each time which one to obey - or even none at all, and find my own route.

Across the UK and most of the Dutch sections, I had no paper map other than a printout from Google maps. Then from Arnhem all the way across Germany I was using the German 'Bikeline' guide. Unfortunately (although in theory designed for it) the book was too big for my map holder, so I ripped out the pages and folded them to fit, discarding the used pages each day. By the time I reached the Polish border, I had litle more than a cover on a metal spiral.

Another guide book (also in German) was available from Berlin through Poland, following the R1 up to the Baltics, so this was useful to me as far as Bydgoszcz. This was a much better fit, and while invaluable, the maps weren't quite as detailed, in particular no distances or gradients marked. As with the other book, recommended sights, pitstops, and accommodation were listed, as well as a detailed profile of the hazards of each country that this section passed through. In Poland, for example, it warned of the crazy driving, lack of cycle paths, and occasional dogs that would chase you down the road, yapping at your pedals.

My Sat Nav device is a Garmin Edge 705. Specifically designed for cycling, it's certainly not as easy to use as a TomTom for the car, and nor does it have any husky voice chastising you for missing a turn; just a series of different beeps. 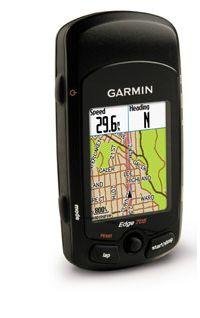 It come pre-loaded with the most useless map, showing no more than the largest roads, exactly the ones you are likely to want to avoid, however you can buy map packs that contain more detailed road maps. These are very detailed for roads all across Europe, but don't show off-road paths. The alternative is to download maps from a website called OpenStreetMap. This is a map compiled by volunteers (and therefore without copyright). In the areas that have so far been mapped, the detail is very good, especially at adding off-road cycleways, and marking the signed routes such as the R1. Through Poland the detail is in places extremely patchy, though the R1 route is marked in detail, even when main roads around are completely absent, so it has been ideal for me. Even across Germany the R1 signs can be easy to miss at turnings, so having some kind of map is essential.

I've got both sets of maps loaded, but am using the OpenStreetMap version, at least until I leave the R1 near Bydgoszcz and have to find my own way to Warsaw. However, I found myself missing the marked R1 route for 3 days in Germany, wondering why it hadn't been mapped there, until I realised the device was set to show the wrong map.

The paper maps are more useful for looking ahead, while the electronic map is more useful for checking you are still on the right route, and zooming in in built-up areas to see junctions in more detail. It's also handy for keeping track of speed, distance travelled, etc, and you can also do some basic routing when finding a particular hotel or couchsurfing address. The device is also supposed to record elevation, though it isn't particularly sucessful - every day there are points that it records me being several hundred metres below sea level! The statistics shown on the Garmin site show elevation: I have set it to estimate based on the known topology rather than the barometric readings taken. If you haven't already seen this, here you can see detailed maps of my every turn, speeds, and so on: Click on the link from my home page at www.hambidge.com for a summary of my daily rides (wait a few seconds for it to filter to my trips), then click on a day from the list on the left hand side to see full details.

If you must know, yesteryear is any point in the not recent past in concievable living memory of anyone possibly still alive, olden times are further back, so that no one alive remembers, and days of yore are days of legend, so did not actually exist or happen at all.