Brandenburg, Berlin and the Border

View London to Warsaw by Bike on bhambidge's travel map.

It had ooccurred to me that the path suddenly improved during the journey the previous day, right in the middle of the forest. That point also marked the border between two regions (Laender) in Germany, from Sachsen-Anhalt to Brandenburg. Apart from the city of Berlin, I would be in Brandenburg until the Polish border, so I had high hopes that the worst of the German cycleway was behind me.

Also, having come so far, I was now only 30km from Potsdam, and 60km from Berlin. This made the capital an easy day ride, but I was planning to couchsurf in Potsdam on Sunday, so had an extremely leisurely two days to spread it over.

I could afford myself a reasonable lie-in. The bed was indeed comfy, and more importantly the curtains were thick and shut out the light, and I got up in time for a late breakfast ready to head off by 11 am. However, this was not before checking my shoes again, that had got so wet three days earlier. They were still soaked. So I took advantage of the facilities in this hotel, and armed with a hairdryer, took it in turns to blow dry each shoe until it was at least in a fit state to pack into the bag without risking soaking everything else.

I'd expected to find today's short ride a breeze; it was almost entirely flat, and almost entirely on asphalt paths through woods and by large lakes. But my body was complaining from the recent endurance and I had to force the pedals to turn.

Fiona wasn't expecting me so early, but she was home so I arranged to drop off my bags before 'doing' Potsdam for the afternoon. However, when I got there, she had a better idea. Her boyfriend Florian had a kayak. The two of them had been planning to go out on the lake for the afternoon, and now I was in time to join them. First we had to cycle over to the other side of the lake to the boathouse. There was a short-cut over a railway bridge that involved hiking the bikes up some steep steps then walking along a narrow path next to the railway tracks. I was glad I'd been able to dump the luggage - the bike was eminently more carryable. Florian explained that this railway line had been of particular importance in the years of the GDR - with West Berlin closed off, the main Potsdam-Berlin route was useless, and this bridge carried rail traffic that detoured round to East Berlin. The line is still in use, but nowhere near as heavily.

At the boathouse, we fetched Florian's kayak and rented a canoe suitable for two. My job at the back was to steer, but I never really quite got the hang of it, and while somehow we stayed afloat, and even managed to go generally in the right direction, it must have seemed more like the drunkard's walk (or row) with us zigzagging around trying to avoid obstacles like buoys and distant boats. Fortunately our motto was 'less speed, less haste', and after a while we pulled ashore on a small beach for a break.

I then tried out the kayak. It was awkward to get into at first, as the opening is at such an odd angle, and your legs stretch all the way into the boat. But I surprised myself how much more easily I could control this with the two-ended paddle. Before you get too impressed though, this is entirely relative. A short circle round the beach was one thing; I then stayed in it for the next stretch out on the open water. Now the larger boat was racing ahead, gliding effortlessly in the right direction, while the kayak was flailing around in a random pattern, struggling to keep up. I had mastered left. Turning right, I had got down to a tee. Going straight ahead? Now that was the tricky bit.

Time was pressing on, and while we had hoped to get far enough to see Potsdam city from the water, we decided that if we turned back now, we could afford a leisurely pace back, allowing for my slalom style. It was time to swap over though; there's very little back support and I was aching, so we rotated: Fiona in the small kayak, and Iwas at the front of the larger boat.

It soon became apparent that Fiona was having as much difficulty with it as I had done - she was pretty adept at making it go backwards (though not when she actually wanted to), and soon after we heard a rumble of thunder. The storm seemed a little way off, but any science teacher will tell you that the middle of a lake is not the ideal place to be in a lightning storm; we tied the two boats together, rowed back to the beach to consider our next move. We were actually much closer here to Fiona's flat, but the bikes were back on the other side of the late, and we had to return the boats. Time was ticking along, and my hosts had an engagement that evening.

We had a farmerly discussion about the weather, Fiona pleading caution, Florian insisting that the wind wasn't blowing the storm in exactly our direction, just as the rain started. There were a couple of lightning bolts, followed shortly by thunderclaps, but aftera while we agreed that the nucleus of the storm didn't seem to be getting closer yet, and that we may as well go for it. With the boats tied together, and Florian's steering skill, we pushed as hard as we could to the next point of safety - directly underneath the railway bridge that we had cycled across. We got there as the storm brewed a little thicker, so took some shelter under the bridge. We were already soaking wet from the rain (and I thought I was done with getting wet), though being a railway bridge, it wasn't a solid surface and we still continued to get wet through the tracks. We counted the time between flashes and rumbles, and argued about how to calculate the distance of the storm*, but agreeing that perhaps we'd best wait here awhile. I clung on to a metal post that protruded from the water to avoid us drifting out into the open water. It soon died down though, and we could row back over to the boathouse, pack up and cycle home in the glorious sunshine.

(* It turns out that I was wrong. We were taught at school that it was an additional mile away every second; apparently it is actually five times closer than that, or about a kilometre away every three seconds gap.)

Fiona and Florian had a family dinner that evening, so I cooked for myself, then went for a bike ride around town to see the sights. Potsdam is famous for its parks, palaces and other buildings, and while the main park was closed, I could ride around the outside and see much of it from the other side. Sanssouci Palace was the venue for Stalin, Churchill and Truman to carve up Germany after the Second World War.

After a delicious breakfast (where we lamented the state of typical English bread - a common peeve among Continental Europeans in Britain), I set off towards my major landmark: Berlin. This took be across Glienicke Bridge, closed for over 40 years to the public, but played host to the occasional secret spy swap. 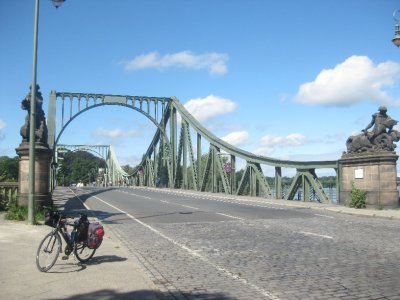 Over the other side, I was surprised how suddenly rural it had become. I drew a parallel with Hong Kong, where a major city is confined in such a small space, and yet there is still so much open landscape if you go beyond the centre. I cycled for several kilometres through forest and woodland, round the Wannsee, until up near Spandau I joined the long straight road that would take me right up to and beyond the Brandenburg Gate. It felt like such an accomplishment as I approached the heart of Berlin, like my journey was already complete - Warsaw was but a short additional hop. I had an evidentiary photo taken at the Gate, and smiled as I continued east along Unter den Linden past many other Berlin landmarks. I was staying in a hostel tonight on the eastern side, so checked in there, before cycling back to the centre for a victory lap, past landmarks like the Reichstag, Fernsehturm, Tiergarten and Checkpoint Charlie. 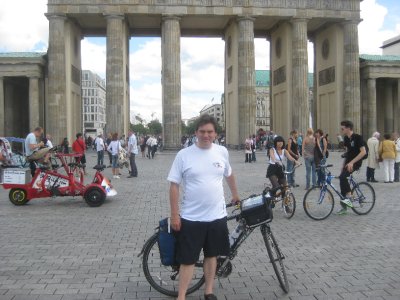 Arrived at the Brandenburg Gate 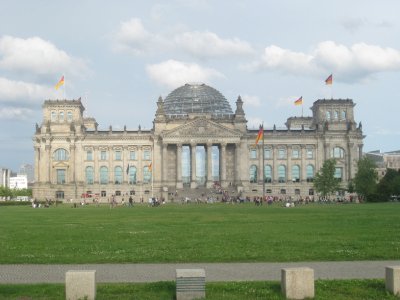 I wasn't couchsurfing in Berlin in the end for some mundane practical reasons, and the hostel afforded me somewhere easy to sit with a drink at a table and catch up on earlier sections of this diary. I had planned to stop a day or two in Berlin, and in other circumstances I might have, but I was keen to press on and complete the journey.

Reaching the border in a day is too ambitious, so I phone ahead to book a room in Buckow, and head off. There are good paths out of Berlin, including a great rural stretch by the Muggelsee. Out of the city limits, the rain starts. Fortunately, it doesn't last long, and 10 minutes shelter under a big tree suffices. Similar small showers pepper the afternoon, until I'm just 2km out of Buckow, when the tree I've found just isn't doing the job. This time it doesn't look like it's going to stop, so I don full wet suit and brave it into the town to find the accommodation. I arrive looking soaked and bedraggled, but it is only superficial, and I soon dry off - as does the weather within 2 minutes of my arrival of course. In turns out to be a picturesque small place perched on the side of a lake, and host to a beautiful sunset.

On my final morning in Germany, departure is delayed as I wait for the drizzle to stop, or at least die down. First up is a hill, about the only one of any note in Brandenburg that I've had to face. This is also one of the few stretches without asphalt, as the road turns cobbled for several kilometres. However, helpfully a narrow brick strip is provided down the side to make cycling bearable and I quickly put the distance behind me. I had planned to take shortcuts from the R1 route as it seems unnecessarily lengthy, but I think it is only along the marked stretches that such consideration has been paid, so I follow the long way round. About mid-day, I reach the banks of the Oder, and there see land on the other side - Poland. I just have 14 km to race down along the Oder to the nearest bridge and border crossing, and I'll say goodbye to Germany. 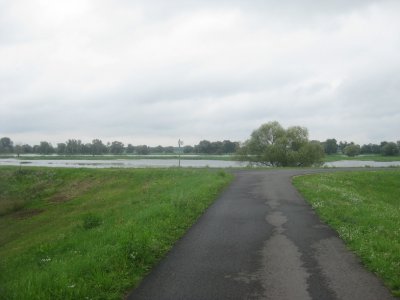 One more obstacle awaits me: a flooded foot tunnel. There's no other obvious route to the border bridge, and accustomed to such things (and to the surprise of another cycle tourer pondering the same difficulty), I hoist up my bike above the water level, and wade my way up to knee-deep again through the 200m-long tunnel.

Poland is now part of the Schengen agreement, which means there are no passport controls here. The buildings for immigration and customs still stand, but are abandoned, and we can pass straight through. I've achieved another significant step - Germany complete, just Poland to go!

Ben I think we are seeing a little less of you!!