When the going gets tough

Quint and Astrid were particularly interested in my trip because Astrid had been on a placement in Ethiopia last year, and experienced first-hand the importance of water and the scarcity of it. Quint was an English teacher, and wanted me to come to school the next morning and talk to two of his classes about both my trip and WaterAid. I was surprised that they were at school in the beginning of August, but apparently in Germany, the regions take it in turns for holidays, so the whole country is not off together.

The weather forecast for everywhere east of here was pretty good for the rest of the week, and the next stage was more down than up, as I was almost at my highest point of the journey. Particularly exciting was that I HAD REACHED HALF WAY! Goslar was roughly the half-way point, just shy of 1000km on the odometer, and the former border to East Germany a mere half-hour ride away. I'd done the hardest part - plain sailing from here. So it was with some dismay that I woke up to the pouring rain. Quint offered to drive me to school (we could put the bike in the back of his car), but I refused. That would be cheating... and with my uploading all the maps and stats of my rides, someone out there would pick me up on it fast enough! But mainly, I would be letting myself down - no transport shortcuts, except for essential ferries of course. Luggage, however, was another thing - I could let him carry that for me for 5 km of my journey!

First lesson was at 8am, so an early start to ensure I got there in time. Quint had gone ahead in the car, and I arrived at the school a little lost, and asked someone where Mr Gembus' office is. I thought I'd asked a member of staff or parent; she looked mature enough, but she shrugged back in Teenager-ese (its the same the world over) "I dunno, he's not my teacher". Evenutally I found someone with a full moustache andlots of wrinkles and decided he COULDN'T be a student, and wastaken through the magic door to the staff area - where it seems quite a few people knew I was coming. "Ah, you're the cyclist. From England. Incredible". (I'm not sure if it was that I had cycled from England that was incredible, or an English cyclist).

The two classes went off pretty well. Year 10 (16 year olds?) were first, and I started by telling them the basics about my trip, and how I met Quint (Mr Gembus to you), and then it was over to them to ask me questions in English. There was the typical boy-girl divide - the boys were too cool to ask anything, and sat there looking bored. The girls were more talkative, and asked some good questions. Next lesson would be to write up an article about me based on their 'interview'.

The second class were a year younger, and the difference in their English reflected that, but again they were motivated and interested, enough so that a couple of them came up to me afterwards to talk some more. Their next lesson was to make some posters; Im looking forward to seeing them!

At breaktime, it was time to head off. Next stop, Quedlinburg, home of the witches apparently (I gather several were rounded up here at one point). That was at the foot of the far side of the Harz mountains, so I headed back towards the woods to follow the witches' trail. Luckily, the rain had eased off to no more than an occasional spit.

First though I had a stretch of country road to follow, and just before I turned into the forest, I crossed the border to the 'DDR', what was East Germany. There was a sign acknowledging the former border, (and division of both Germany and Europe). In the forest, a short distance on, the trees suddenly stopped for a strip about 50m wide, and stretching into the distance over the hill. This was the 'green band' - rather than erect a border like the Berlin Wall across the entire landscape, here they did the opposite - made it impossible for people to avoid being seen if they attempted to cross, and of course they were shot on sight. 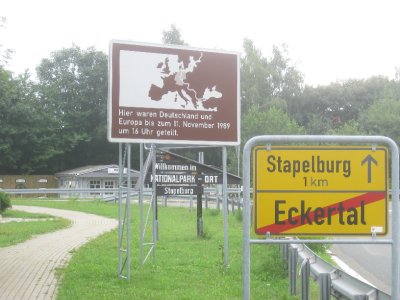 At the East German border 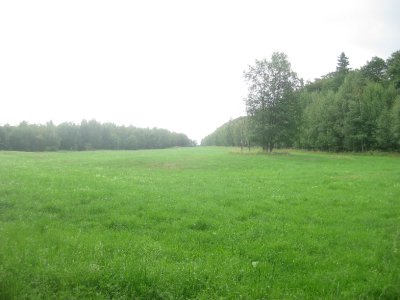 Although I was supposed to be going more downhill, there were plenty of ups, and the path was full of rocks and potholes. Had to concentrate hard to avoid dangers so even the downhills were a crawl, and very hard work on the hands, if not feet. Occasionally I'd notice a dip too late at bounce over a hole causing my luggage to jump. Frankly, I'm surprised I've suffered no punctures so far. This section would be far more suitable with a mountain bike with the wide tyres with good grip. At one point in the forest I was overtaken by a jogger - how embarrassing! But even on the downhills I could only manage to hold a speed of about 15km/h, when on a good surface, I'd be racing down at 40km/h plus.

Down into Wernigerode, I started noticing the difference with East German roads: many were in a very new condition, but those that weren't had been badly patched over the decades, and again racing down hills wasn't possible - in fact it was more precarious than on the forest paths as the potholes were deep with sharp edges.
I headed straight through the town, and could see from the map I'd soon be back in the forest. A pretty castle was perched on the top of a steep hill. I laughed that there was no way I'd be visiting that up there, but then it dawned on me that the R1 route was going to take a sharp backward-turn and up this incredibly steep hill. Somehow I stayed on the bike until it flattened out, by which time my face was beetroot read and hot enough to fry an egg. Fortunately I didn't have to go all the way up to the castle, but it was still hard work... only then to be back in the forest for more rough path torture.

Well before Blankenburg I was thoroughly sick of these picturesque but treacherous trails and was cursing at the top of my voice. When I finally found a route out, I took it, ignoring my planned route - I didn't care where it was taking me, I just wasn't going back into the wood again. Proper asphalt! What a luxury! I'd taken it for granted across the first half of my journey, but now I was being punished. But there was no escape - the road I was on led down to a rounabout where every exit led me back into the forest and onto the Europaradweg R1 - and this time the path didn't even pretend to be leisurely well-planned stretch for all-comers. It narrowed to a thin track, hopping over large tree roots and abruptly round handbrake-turn bends and up steep sections of track, like a gruelling BMX course.

After that, the descent into Blankenburg on the boneshaking cobbles was a godsend, and I was relieved to find somewhere to stop for a well-earned late lunch. Bulgarian cuisine seemed an unusual speciality for a pub at first, but just 20 years ago, Bulgaria was the Florida of commie holiday destinations.

I checked the map. Downhill or flat all the way to Quedlinburg. All roads - no more forest! But it seemed there was a mystical kilometre of sharp uphill that the map lied about. Then, finally, the reward. 4km of constant downhill, on a perfect asphalt road. OK, there was no cycle path and I had to share it with some traffic... but I didn't care. This was a few minutes of bliss. At the next village of Timmenrode, I looked for the signpost left to the following one, Warnstedt, 3 km further on. I was somewhat confused to see the signpost pointing the other way, with a distance of 9 km. Strange. I checked the map, and then saw the name of the street - Warnstedterstrasse - well surely that must go to Warnstedt. Indeed it did, but I soon found out why traffic was sent the very long way round. These weren't potholes. They were craters. This was the worst condition road I'd come across, and although it was perfectly flat, it must have taken me half an hour to cover the three kilometres. I stayed on the bike, but I'd have been no slower walking. By the end of it, my hands and shoulders were tingling from the constant vibration and jolting.

The final short section to Quedlinburg was smooth, flat and easy, if a little heavy on the traffic. As a student of Transport Planning I know that the key requirement often considered for a good cycle route is the traffic level, followed by the gradient. But from my first-hand experience today, we perhaps take for granted that the surface will be solid and smooth. That's now number one criteria on my list. As if to confirm that, Quedlinburg greeted me with the biggest, bumpiest cobbles possible, and my innards wobbled their way into the town centre and on to my B&B. Several detours were necessary to avoid major roadworks and random flights of steep steps at the end of paths - but eventually I found it! As there was no breakfast provided, I intended to head straight back out while the shops were still open to get some provisions and see a bit more of this UNESCO heritage town. Then I promptly lay on the bed and fell asleep.

Any pretensions I'd had at the beginning of the day that the hardest part of the journey had already been conquered was well and truly shattered. What was East Germany and Poland going to throw at me for the rest of the ride? 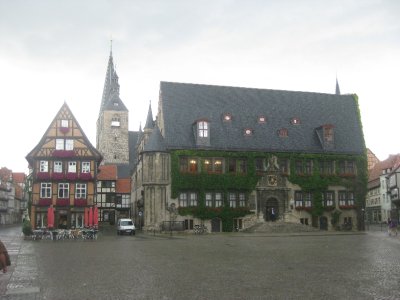 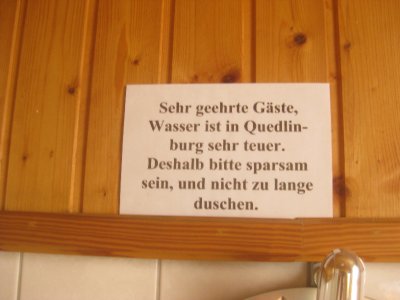 Reminder that water is precious in Quedlinburg