I had a decision to make. I'd stayed somewhat off the route, and there was an easy shortcut that bypassed the peak of the hill. Or I could backtrack slightly, go up the hill and see the sight at the top. Lazy or virtuous?

The free night's accommodation pushed me to be virtuous, and as I started to climb the hill, the heavens opened. No cafe nearby to duck into, I donned my rain-gear for the first time and faced the elements. The Externsteine is often referred to as Germany's 'Little Stonehenge', though I'm not entirely sure if it's an in-place rock formation or carried there. Certainly there's something about the light shining through the right way at the solstice. 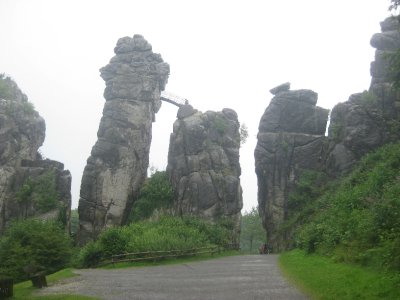 The path up through the wood was steeper than I'd had to deal with so far, but the trees offered me some shelter from the rain, and the surface was very good. Back out the other side, I had easy paths running alongside a small river, and I found I could race along at 30km/hour even on the flat. I had more power in my legs than a week ago, and the hills had helped strengthen them further. When the route turned uphil through the fields, I slowed but wasn't always finding myself switching down to the granny gear. 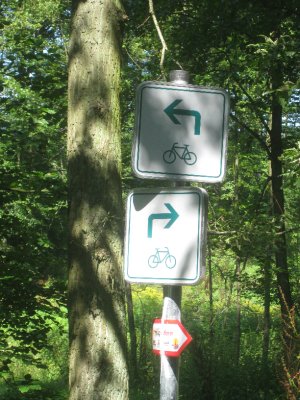 By lunchtime, the sun had come out properly. I'd faced rain and hills together in the morning, and survived.

Sunday roads are very quiet. No shops are open, and large lorries are not permitted to drive on Sundays. The towns and villages are almost ghostly, unless you pass through at the start or end of a church service. I found a pub with a few drinkers sitting at the bar and checked the kitchen was open. A full menu of 18 dishes was presented - all of them schnitzel. I settled for the 'devils' schnitzel (well, it was Sunday) served with a pepper sauce. The food soon arrived and the plate was overflowing. A huge slab of breaded meat with a pile of fries and a salad garnish. On a separate plate came a side salad - you could tell that even the salad had a salad garnish on the side. All this cycling was making me very hungry, but even I couldn't finish it.

Largely a gentle downhill for the rest of the day to Hoxter made for a pleasant, easy ride, and I sailed into the town about 4pm. I checked the map for the location of the youth hostel. I checked it again, turning it around. Surely some mistake. The direction of the youth hostel would appear to be incorrectly marked near the top of the most enormous hill. No-one had told me that. I checked again, and set off, a bit miffed, having thought I'd done my work for the day. I found myself very quickly in the lowest gear, determined to tackle this hill on the pedals rather than walking. I could see a large building in the distance - the hostel. At least I had a target to aim for. It felt like a 1 in 1 incline all the way up, and long before I reached the building I was puffing and panting, wishing I hadn't bothered with any luggage for the month. As I approached the building, I saw a sign for the youth hostel... pointing FURTHER UP THE HILL. This wasn't it at all, it was a school. So I kept going, crawling up in second place to a tortoise. I could see the top of the road not too much further ahead so fixed my eyes on that and counted the revolutions of the pedal. I got to the top! Only to find it wasn't the top at all... just a bend in the road, as the gradient got steeper. I was now basically riding vertically up a cliff-face, my wheels gripping to the road surface from a combination of sheer force of pedalling and some kind of magic curse. I tried to cycle from side to side, the way you can walk up a hill to make it easier, but soon found this doesn't work so well on a bike. Soon, finally, at last, the entrance to the actual Youth Hostel appeared - the real one, not a mirage, and a muttered under my breath some kind of self-congratulatory blaspheme, and a vow never to come here again.

Well of course, the hostel, only having two guests that night, wasn't doing evening meals. I'd have to go into town. And you know where that is, don't you? I considered trying to find some abseiling gear to hire, but set off again down the hill, this time on foot, for the mile-long trek down to the town centre, knowing I'd have to face it once more that evening.

The town was absolutely stunning; most of the buildings in the centre were up to 500 years old, and have been kept as close as possible to their original form, half-timber with colourful decoration and ornate writing along some of the beams. I would later see much more of this in other towns like Einbeck and Goslar, so is obviously characteristic of the region. 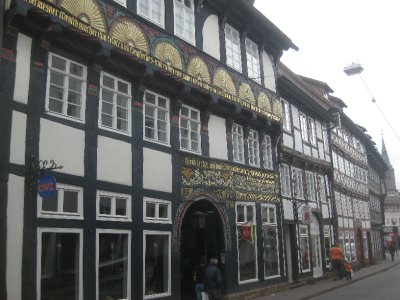 Down the hill again in the morning was a very careful affair - I could feel that my brakes weren't in top condition, and I daren't let the bike go more than walking pace. I found a bike shop to replace the brake pads before continuing on my way.

I had a few miles of flat alongside a river before heading back uphill again. Like a child dragging a sledge up a hill to be rewarded with a few seconds of blissful speed downhill, I spent quite a lot of this day alternating between stamina and speed. I decided that endless flat can be tedious, but cycling hills is uneven: timewise it feels like you're always going up, bevause the downs are over soquickly. And so often you have to waste hard-earned freewheeling on the brakes because of rough surface, tight bends or junctions or oncoming traffic. Worst is when there's a junction at the bottom of the hill, and you have to face the next uphill from a standing start again instead of using the momentum you'd built up.

Thought for the day: why do we consider heaven to be up, when all cyclists know it's downhill? 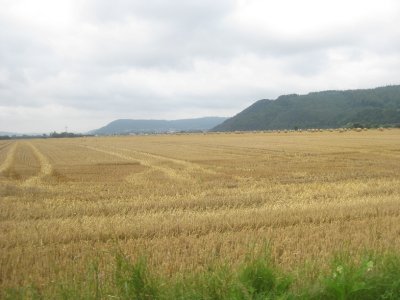 I was being very lucky with the weather overall - so far just the one monring of rain, and usually overcast or sunny (never too hot) with little wind. I made good progress to Bad Gandersheim where I stayed overnight. The next day was much the same, though the hills were becoming more numerous and pentiful - I was now skirting the edge of the Harz mountains. This still involved a lot of country lanes through cornfields, and butterflies danced around me as I sped along (or heaved myself uphill). The biggest clue that I'd reached the Harz mountains was the signs for the R1 cycle route had changed to include the symbol of a witch on her bicycle, broomstick safely stowed behind. I'd follow these signs for the next 2 days as I crossed the Harz region. 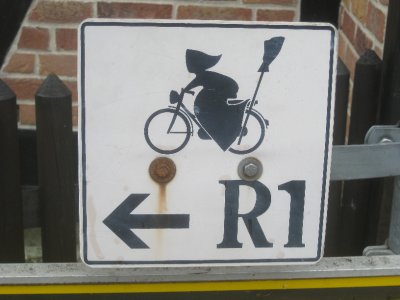 But as I got into the wooded areas, the going was much more rough. It was muddy under the trees where there hadn't been enough sunlight to dry the path, and the bike slid around with its narrow road tyres. I concentrated hard to navigate a course that was as smooth and dry as possible, but slipped a couple of times, and wished I hadn't worn sandals that day!

To make things harder still, my Sat Nav had given up on marking the R1 route for me a couple of days ago, and even the off road paths that used to be marked noo longer were, so I was reliant on the paper maps and signs - but they could be easily missed, or misunderstood. (Actually it turned out after 3-4 days that the sat nav had switched itself onto a 'road map'mode rather than the cycle map, so I was struggling unnecessarily. You'd think I'd know how to use the technology, but I can assure you that this GPS is renowned for being quirky and difficult). 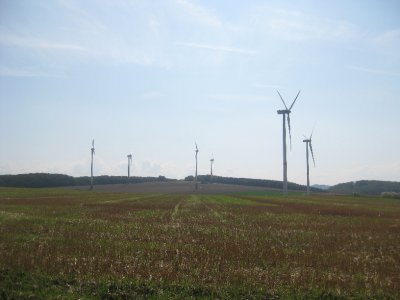 A brief note about the route numbering. It is (pretty well) marked as the Euro-cycle route R1, but on any German publicity (e.g. Tourism offices) it is known as the D3. They also mention that it is part of the long distance Euro-route EuroVelo 2. The publicity makes no mention of R1 which is actually signed. Very confusing.

I was due in Goslar that evening, which wasn't too far away, but I'd allowed for the hills. Despite their number, I didn't find these as bad as I'd thought - I just got on with them and had a rest at the top. I made good time and got to Langelsheim in time for lunch. I stopped at a cafe- just in time! At 1 pm, the cafe was shutting for lunch! I think they're taking the mittagspause a bit too seriously. I was allowed to sit at the only table outside and instructed to leave the plates there when I was finished. The door was locked behind me as I took my sandwich and cake out.

In Germany, just as it used to in Britain decades ago, most shops shut for lunch; they also close for a half day on Saturday, and often one day midweek. And everything, bar petrol stations, transport hubs and tourist sites, is closed on a Sunday. There are no 24 hour supermarkets - you'll be lucky to find anything open past 6pm (or maybe 8pm for the bigger supermarkets). 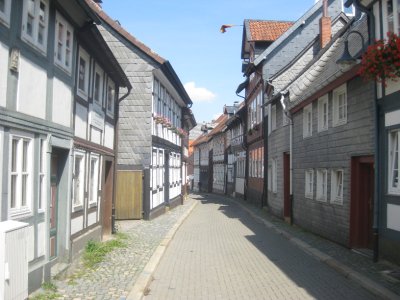 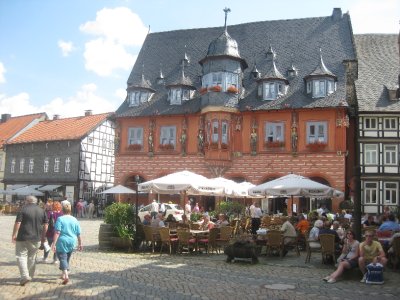 Every time I think I'm at the top, another summit looms ahead. The couch I was surfing tonight was a little beyond beautiful Goslar, and looked like it was just round the side of another hill, but I seemed to manage to go over the top of it. A very pretty ride nonetheless, and I wasn't completely exhausted when I arrived at Quint's house. He was sitting in the back garden in his big beach chair. His house was nestled between the steep slopes of the hill I'djust tackled, and the one I'd face tomorrow. We sat and chated for a while before popping to the shops to buy things for an evening barbecue, which we enjoyed when his girlfriend Astrid got home. Then we had to discuss my destination for the next morning.... school!

Your calf muscles will be ENORMOUS by the time you get home!!! well done Ben, I'm very proud of you.

Following your adventure s in the Harz mountains, you can then compare those of Jack and Eliza in the same region in your big book that you haven't read yet.