Up, up and away

The cycling is getting easier, and the aches and pains less noticeable, though Sudocrem seems to help with saddle sores (though parents: what's with Sudocrem? - it's horrible stuff to wash off your hands, especially if you're trying to be sparse with the soap). 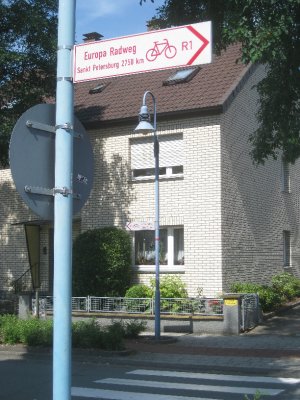 There's a fair way to go yet

The ride to Guetersloh was pleasant but uneventful, mostly cross-country, through farmland (with all the country smells that entails), then skirting round the outskirts of Harsewinkel, then stopping for an ice-cream before cruising into Guetersloh. Famous only for being the home of washing-machine manufacturer Miele, I didn't spend any time exploring this town, but went straight round to my host for the evening, Svenja. Once again, a very friendly host. Conversation flowed, we popped out for pizza, fixed her computer, out again for a pint at the pub, then a comfortable night's sleep and I was on the way again.

Sunday held some apprehension. I'd been on the levels for so long, but today I'd have to face a hill! How would I cope? Would I manage it? A little way out of town, I stopped at a roadside kiosk for some strawberries. They were being sold in the most enormous punnets, but I asked for just a few - she could see I couldn't carry more, and she dug out a smaller box and half-filled it for me. "Present!" she said. No charge. I then explained what I was doing, and she and the other waiting customer were so impressed, and waved me on my way. I enjoyed the strawberries as I rode along, trying to ensure I didn't drip juice on my clean white shirt. They were the tastiest strawberries I think I've ever had. All perfectly firm and the right colour; just delicious, and spurred me along. 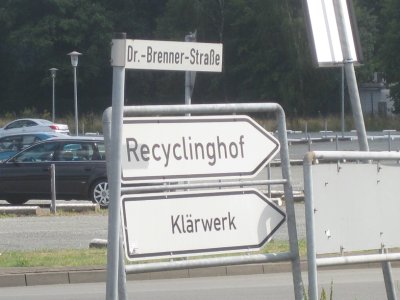 Many of the towns and villages seemed to have Saturday markets; often the equivalent of our car boot sales with all sorts of junk being sold. They were very popular, and some of them even had an entry fee. That put me off browsing, so I pedalled on. I had to watch my route a bit here; I was keen to go over the hill the easiest way, but it took some finding to get across country to the right way. I needn't have worried too much about the gradient - it took some effort of course, but it was all manageable, and a pretty diversion through the Teutoburger forest led me down the other side into the town of Detmold. I hadn't ruled out stopping here, as I didn't know how onerous the hill would be, but instead I passed a couple of hours in a pub garden (finally opening my reading book for the first time) before heading over the next hill to Horn Bad Meinburg. 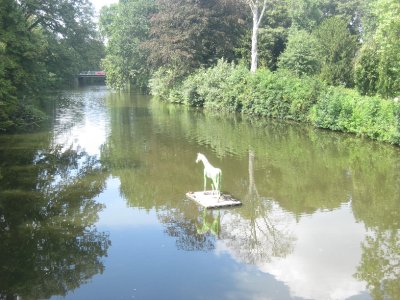 I don't know either

I had intended to stay at the Youth Hostel here, but they wouldn't let me for some obscure reason, so I rang ahead to a guest house. I arrived to be greeted by one of the two sisters who run the place. I told her about my trip, and she was so excited. After she had shown be to my room, she turned up again five minutes later to say that they had been talking about me, and wondered if I would mind if they contacted the local newspaper to tell them about my journey. I agreed, and thought no more of it. In the morning, I went down to breakfast, and as every other guest arrived, one sister or other would tell them about me. 'Well, you'll never believe who we have here. Our guest, Mr Hambidge, is cycling all the way from London to Warsaw, and raising money for WaterAid'. And I'd repeat the story to them again in broken German, wishing I'd bothered to memorise some of the key words. Sister number 2 apologised that they hadn't managed to get hold of a reporter, as it was the weekend, but that they'd write something up themselves, if I didn't mind. Then just as I was leaving the breakfast room, in rushed excited sister number one to say that a local reporter was coming after all to interview me, and could I stay until half past ten? Of course I could.

I've not spoken a huge amount of German since school, and my efforts were more akin to leprosy than rust, but neither the reporter nor the sisters speaking more than a few words of English, I managed to battle through his questions, and even embellished on some of the details. We went outside and loaded up my bike for a posed photo, then when the reporter had gone, the sisters took it in turns to have their own photo taken with their new-found celebrity.

They refused to charge me a penny for the night's stay, and sister number two produced a packed lunch that she'd prepared for me. Sister number one then dashed back inside, and returned to present me with a boiled egg that she'd cooked for me specially. Before they waved me off down the street, they asked my permission to display the newspaper article (assuming it was published, of course) in their display cabinet in the hallway. How could I refuse anything to two such lovely and friendly ladies? 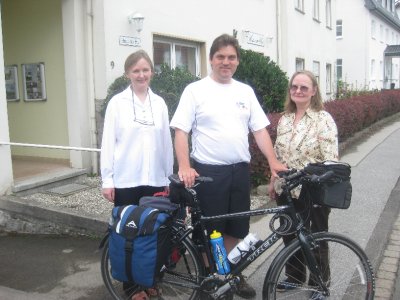 The sisters at Bad Meinberg

This is heartbreakingly sweet, and, of course, priceless - I can just picture the breakfast scene! (Hey, hope you told the reporter your JustGiving address!)

Herzlichen Glückwunsch on reaching the halfway point. Enjoy Quedlinburg and watch out for the witches! Better stock up on the Kartoffel now; the Harz mountains lurk ahead... Vorwärts!

Yes, reporter has full details. Plus my email address to let me know if anything is published, though I've not heard yet

Do you know, I haven't found any mention of witches this evening in Quedlinburg? But thankfully the Harz mountains now lurk safely behind... those tales to follow when I get time to write it up! Meanwhile the bloody awful East German roads lie ahead... Vorwärts!

WAS?? Ask someone about Walpurgisnacht... I was sure they were pretty much ubiquitous - there's definitely a place where they are said to hold revels and I thought I remembered weird statues, and certainly shops full of'em! I have a rather charming mobile (airbound on broomstick!)

Sudocreme as any fule know is most often used on babies little bottoms to provide a waterproof coating; hence the difficultie in washing off your hands ( getting it off your clothes is difficult too.) have you thought of wetwipes???